When the 747 entered revenue service in early 1970, the people at Boeing had a big hit on their hands. Despite its size, the huge capacity aircraft brought seat/mile costs to new lows and opened up international travel to those who previously couldn’t afford it.

Pan Am, Northwest, TWA, and others were snatching up 747s as fast as they rolled off the line.

Douglas and Lockheed conceded the upper end of the jumbo market to Boeing, but saw an opportunity to exploit a gap in the Boeing product line between the 169-seat 707 and the 380-seat 747. Their answers came in the form of the DC-10 and L1011. The medium-range Douglas and Lockheed planes were well received by the airlines, and long haul versions were on the drawing board.

Boeing realized it needed to fill this gap quickly or risk losing that portion of the airliner market entirely. Joe Sutter, Boeing’s chief engineer, knew the quickest and cheapest way to answer this need was to redesign one of the existing Boeing models. Precedent in the airline industry had already been set for these sorts of modifications. So called “stretch” versions of Boeing and Douglas aircraft were already flying. But Sutter had a different approach: Instead of a stretch, how about a “chop?” 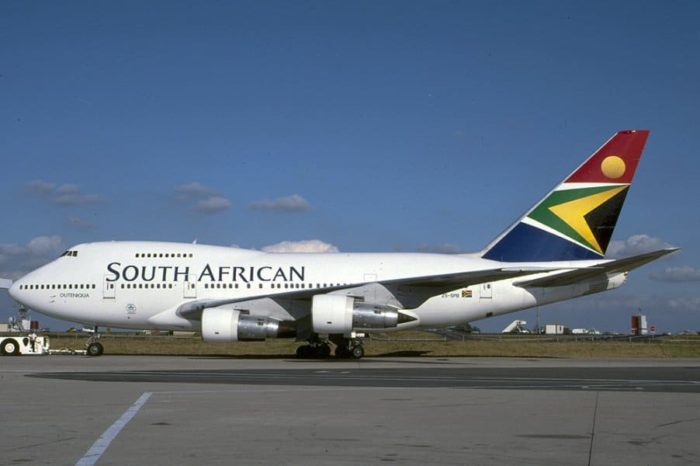 His notion was to take the existing 747 design and shorten it, thus reducing its weight and optimizing it for both transcontinental and international flight.
Thus was born what was originally called the 747SB (Short Body) concept. The biggest problem Sutter and his crew faced was matching the fuel economy of the competition’s tri-jets. One of the ideas put forth was a three engine design, the notion being that elimination of an engine would automatically lead to a 33% reduction in fuel usage, as well as nearly seven tons of weight. This would place one engine under each wing and one engine in the tail, much like the other tri-jets.
However, this proved to be too difficult an engineering challenge, and would have required a time consuming and costly redesign of the 747 wing.

In the midst of this redesign process, Pan Am announced it was looking for an aircraft to fly “long and thin” routes that were too lengthy for the existing DC-10 and L1011, but for which a standard 747 offered too much capacity. Douglas and Lockheed were already working on long range variants of their wide bodies to fill this niche. It was decided the best option for Boeing was to stick with the four-engine design and seek improved fuel economy by saving weight in other areas of the plane.

We cannot display this galleryBy 1973, the model had been renamed the 747SP (Special Performance) and was approved by the Boeing board in September of that year. Within weeks, Pan Am placed an order for ten aircraft, with options for another 15, with deliveries to begin in 1976. The Pan Am deal was valued at $280 million and gave the 747SP project the steam it needed to move full speed ahead. Boeing estimated that a market existed for 214 aircraft, and the financial break-even point would be achieved with 45 aircraft.

Pan Am B747SP
The final design was approved, with the 747SP being 48 feet and four inches shorter than a full size 747 (comparable in length to today’s 767-300), and carrying in the neighbourhood of 280 passengers.
This resulted in an initial design weight reduction of 11,000 pounds, with fuselage sections being removed from in front of and behind the wings, and a redesigned center section. 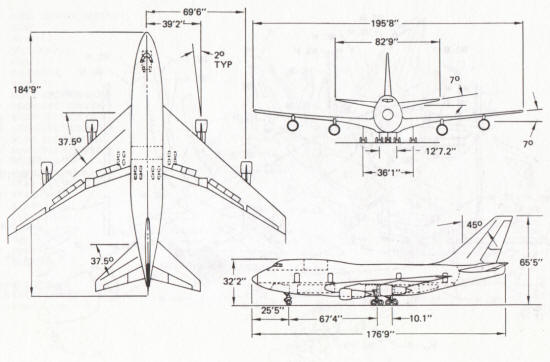 Lighter materials were used in the wings, and single-slotted flaps replaced the complex triple-slotted flaps of the 100/200 series. The under-wing “canoes” which housed the flap mechanisms on full-size 747s were eliminated entirely on the 747SP.
In all, an empty 747SP weighed roughly 45,000 pounds less than an empty 747-200.

Other visible differences were ten more feet of span in the horizontal stabilizer, a slightly taller vertical stabilizer, a double hinged rudder, and a tapering of the upper fuselage into the empenage. The redesigned center fuselage section also necessitated a redesign of the wing fillets to improve airflow. 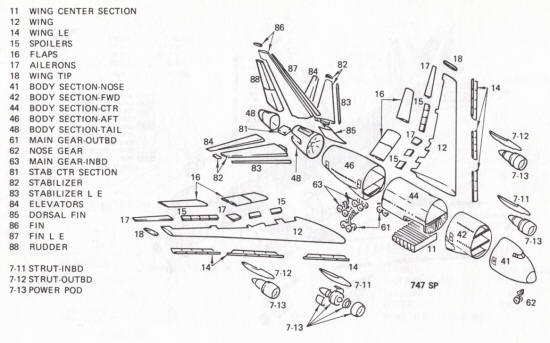 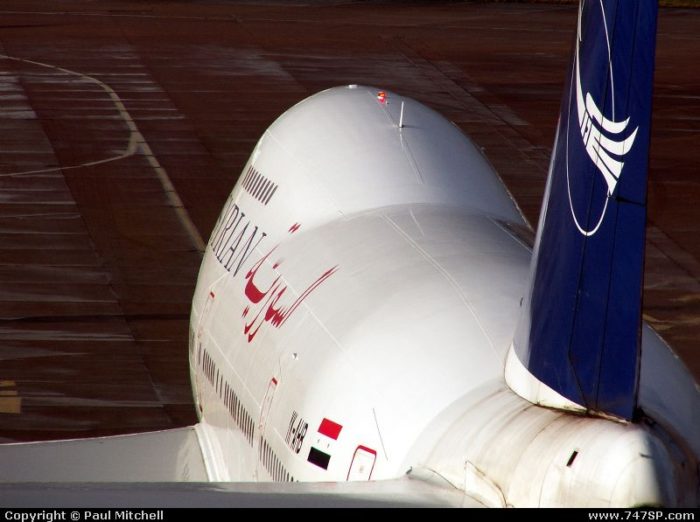 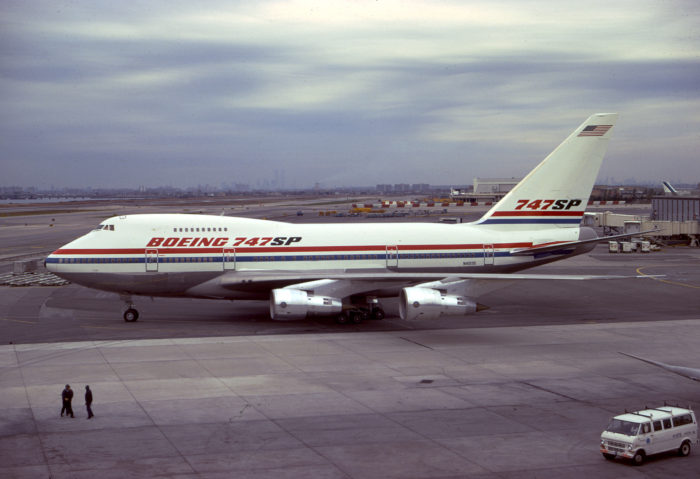 With a much lighter airframe, yet with the same power as a full-size 747, the 747SP exceeded many of its design estimates, and was proving to be a very strong performer. On November 12, 1975, Boeing decided to showcase that performance, and flew the fourth 747SP (c/n: 21025) non-stop from New York to Tokyo (a distance of 6,927 miles) with 200 passengers on board in 13 hours, 33 minutes, setting a new world record. After landing, the aircraft still had over 30,000 pounds of fuel remaining!

The Boeing 747SP was granted a supplemental type certificate on February 4, 1976. A month later, on March 5th, the record setting 747SP, now name “Clipper Freedom” (c/n:  21025), was delivered to Pan Am, with revenue service commencing in April.

The 747SP continued to be an exceptional performer, setting multiple distance and speed records. However, despite its strong numbers, the shifting sands of airline economics had quickly changed the landscape for the 747SP. This was due in part to continued improvements in the 747-200B, airline deregulation in the U.S., and escalating fuel prices worldwide.

Although initially expressing interest in 25 aircraft, financially troubled Pan Am ended up only taking their initial order of ten (although they later added another 747SP, formerly ordered and owned by Braniff).
Qantas, an early 747SP enthusiast, only took two.
Boeing’s 747SP order book quickly slowed to a trickle, with most orders amounting to no more than a few aircraft.
The final regular production 747SP (c/n: 22858) was delivered to the Iraqi Government on August 30, 1982, and was the 44th 747SP produced.

With its 45th aircraft having been rolled out, Boeing shut down the 747SP line for good.

The first 747SP to be scrapped (c/n: 21025) found its way to the cutter’s torch in 1997, but many of the former airline workhorses have found a new lease on life with the ultra-rich.
In the intervening years, the 747SP has become the aircraft of choice for dignitaries, celebrities, and heads of state. The 747SP conveys the unique look of the 747’s strength and power, but without the size penalty for the multi-billionaire who needs to find a parking space.

We cannot display this galleryIn the end, it’s hard to know whether Boeing made back its initial investment on the 747SP. But Boeing would claim the 747SP program to be a success regardless, for no other reason than it provided a springboard for many airlines to enter the wide body market. Indeed, the 747SP broadly extended the reach of several airlines, including South African Airways, China Airlines, and Iran Air.

To see where all the 747SPs have ended up, visit our PRODUCTION LIST.