Over the years, many significant events have been celebrated with the issuance of special commemorative postage stamps, postcards and envelopes.  These events range from Olympic games, to Worlds Fairs, to Presidential Inaugurations.

Unique among these are letters that are carried on specific and significant aircraft flights.  Known as "flight covers," these letters are carried onboard the actual flight they commemorate, and are hand cancelled with the date of the flight.

Because of it's frequent history-making flights, a number of flight covers have been produced featuring the 747SP.
In fact, the earliest flight cover featuring the 747SP is from
it's very first flight on July 4, 1975.  That flight carried a special cache of hand cancelled letters in the cargo hold, commemorating the type's maiden flight.  After the flight was over, the letters were made available for sale to Boeing employees for 25 cents each.

Particularly prolific in their production of flight covers were Pan Am and South African Airways.  Both airlines frequently carried a cache of flight covers whenever opening a new and particularly long distance route.
Pan Am produced a flight cover to commemorate its first non-stop passenger service from Los Angeles to Tokyo on April 25, 1976.

Just a few days later Pam Am would produce another cover, this one going around the world on the historic flight of N533PA from New York - Delhi - Bangkok - Tokyo - New York.
It was at this point that Pan Am was very aware of the record breaking abilities of the SP and took every opportunity to demonstrate the plane's "long legs."

SAA produced its first flight cover even before the 747SP flew in scheduled service for the airline.  ZS-SPA carried a cache of flight covers on it's long distance delivery flight from
Everett to Cape Town on 23-24 March, 1976.  The 747SP opened many new long
distance routes for the airlines, and there are any number of flight covers
commemorating these flights.

Other airlines producing covers include United and Iran Air.  All told, there were around a dozen or so flight covers produced that specifically commemorated the 747SP by name.
Obviously, it's unlikely any more will be produced at this point as the 747SP is in the twilight of it's life. 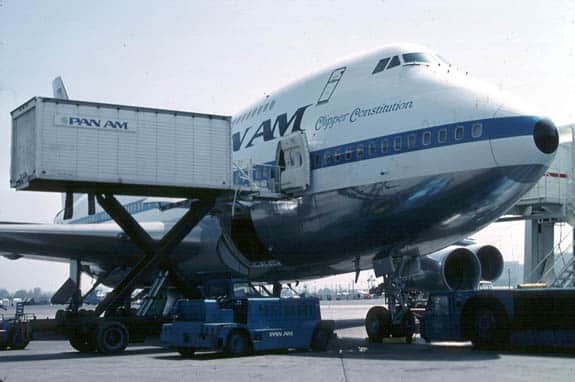